AOL's $405 million acquisition of video ad exchange Adap.tv has already begun to pay off, at least in bragging rights.

In September, the same month the Adap.tv deal closed, AOL passed Google as the company serving the most online video ads in the U.S., according to comScore. AOL ran 3.72 billion video ads to reach 50% of U.S. online video viewers versus Google's 3.24 billion and 36% population span. 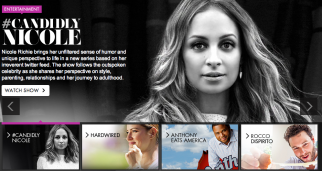 AOL wouldn't have one-upped Google were it not for Adap.tv, which remains a standalone entity within the company's ad tech division AOL Networks. The ad tech firm accounted for 3.13 billion, or 84%, of the video ads attributed to AOL -- and as a result, should result in an sizeable boost to the portal's video ad revenues.

That's compared to 275.8 million video ads, or 7% from Advertising.com. The portal's dedicated video properties, including AOL On and HuffPost TV, added 144.9 million spots that averaged 6.7 video ads per viewer.

Adap.tv's exchange fills ads for thousands of publishers, including 72 of comScore's top 100 publishers, and AOL itself. AOL had been a top-10 seller within the exchange even before the acquisition, said Adap.tv CEO Amir Ashkenazi.

He was unable to characterize what types of video inventory AOL makes available through Adap.tv, be it AOL On or the AOL home page, but said that next year Adap.tv will have "a more complete presence of AOL inventory." 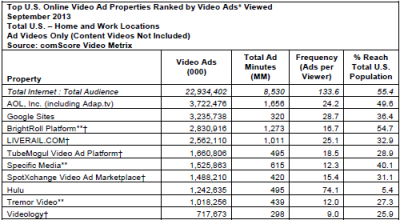 Google has dominated comScore's video ad rankings over the last year, as might be expected for a company that owns YouTube, which attracts more than 1 billion video viewers each month. Google continues to dominate all comers when it comes to audience size. The search giant spanned 165.4 million unique video viewers in September, per comScore. Facebook followed at 67.2 million viewers, and AOL trailed at 61.8 million.

However AOL isn't the only company to have toppled the goliath in the last twelve months. Brightroll overtook Google in October 2012, November 2012 and May 2013, but that video ad network has struggled to keep pace with Adap.tv in recent months.

Adap.tv has climbed comScore's rankings over the last year. In September 2012 the company served up 1.04 billion video ads, crossed 2.10 million in May then edged out Brightroll with 2.45 billion in August to settle behind Google.

Aside from AOL overtaking Google, comScore's rankings of the top 11 U.S. online video ad properties stayed more or less the same aside from TubeMogul leapfrogging Specific Media, SpotXchange and Hulu for the sixth spot.