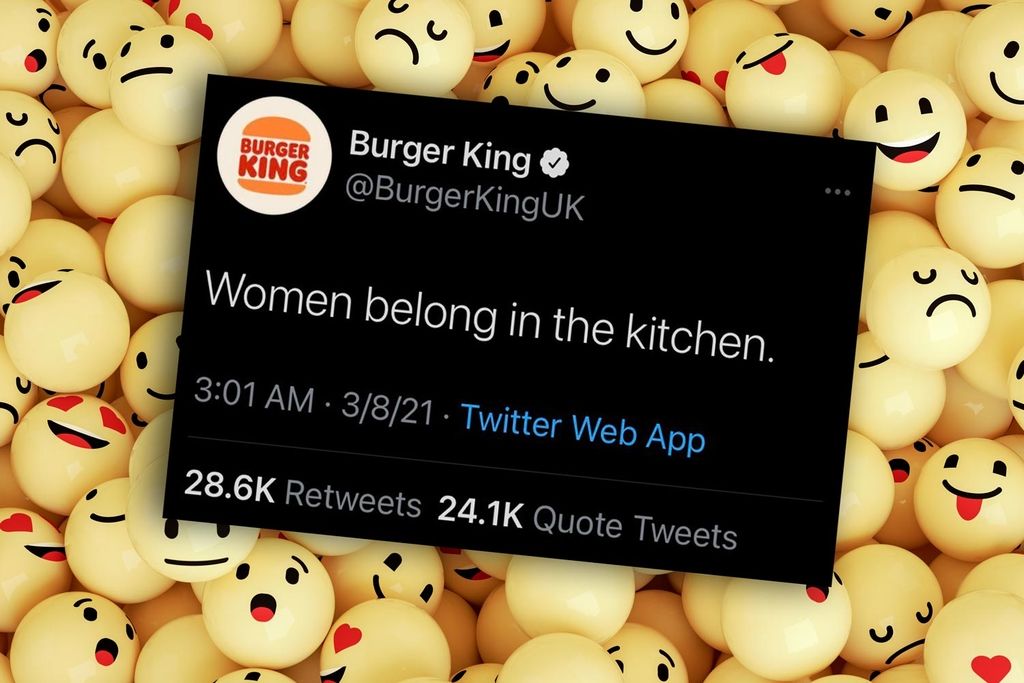 This week, Burger King found its International Women’s Day campaign under fire after its Burger King U.K. Twitter account began a thread explaining the campaign with the tweet “Women belong in the kitchen.” People who only saw the first tweet were enraged that the brand would choose a day made to honor women to make such a claim. Others were upset that the brand would stoop to using such a condescending and outdated joke to drive eyeballs to its new campaign meant to amplify women. After hours of complaints from consumers, Burger King apologized and deleted the tweet, saying it was “designed to draw attention” to the issue behind the campaign—that only a small percentage of chefs and head chefs are women.

The snafu was one of the major brand blunders of the year so far, and a prime example of the perils of using shock value in social media marketing to grab the attention of social media users, especially when the cause is not a laughing matter.

“The tactic Burger King used was obviously to shake up the internet, and mission accomplished. But where it really stung is that on a day meant to honor women, Burger King put themselves first and the wellness of women somewhere far down below that,” says Lynae Cook, a consultant and contractor who has formerly worked as a social media strategist at Starbucks.

The curse of the algorithm

The truth is that social media has crafted an environment where brands, always seeking to be in front of consumers, are resorting to ways to beat platforms’ algorithms, which fill user feeds based on high engagement and their content history. In other words, a platform prioritizes content that might be alarming, risky or appalling, but starts conversations. A brand posting significant or relevant content to their audience might not fare as well as one that is always putting their spin on a cultural moment or constantly sharing their take on the latest internet meme.

“The fear of being left behind motivates marketers to drive to the edge. More funny, more edgy, more controversial,” says Julius Geis, founder of brand strategy and consulting agency 'Āina Identity Design, which works with brands like Kia, Carlsberg Beer and Burt’s Bees. “Social media algorithms support brands that engage in this type of messaging with higher activity versus brands that say something meaningful to their followers. But fear and insecurity never create anything good.”

Most of the time, the content is harmless. Food brands like Burger King, Wendy’s, McDonald’s, Oreo and others have become known for their often quippy, if not downright sassy or edgy, posts on Twitter, acting like they are any other user. Tactics like this have boosted their followings, amount of media coverage and subsequently their consumer base.

However there’s always the chance that a misfire could ruin a perfectly good campaign. Industry experts agree that a single social post has the power to make or break a concept, no matter how many hours or strategy went into the original idea. For brands fighting to get consumer attention on social media, that means the stakes have never been higher, which is why crisis experts say be prepared for any wayward posts.

“There’s nothing wrong with going edgy provided you’re prepared to cope with any fallout quickly and compassionately,” says Erik Bernstein, president at Bernstein Crisis Management. “You wouldn’t start a bonfire without a way to extinguish it and the knowledge of how to stay safe. Why treat your reputation differently?”

If a mistake does happen, experts say don’t panic. While it might seem like an overwhelming amount of people might be calling a social media snafu a disgrace, it does not mean it’s the standing opinion of all consumers, or moreover, even your target consumer. Due to the nature of social media algorithms, social media “bubbles” do exist and a tweet that goes wrong might not reach far beyond those confines.

That said, it can still be a mistake to ignore even temporary uproars. “If your brand stumbles into the ongoing culture war, you might find your tweet discussed on Fox News or 'Good Morning America,'” says Ella Dawson, a culture critic, digital strategist and previous social media editor at TED. “Suddenly one tweet is linked to values your brand may not share, and that kind of brand association is incredibly difficult to shake. Context collapses quickly online: what happens on Twitter doesn’t stay on Twitter.”

Before the beef hits the fan

To make sure brands don’t cross the line, experts suggest putting some important guardrails in place. Bernstein suggests brands or agencies have a specific person or small committee with people not too close to the project so they can objectively ask: “What could go wrong?” He says he works with several clients that do run their social posts by him, but more should run double checks on their efforts.

A common belief for non-marketers is that brand social posts are in the hands of a lone social media manager who determines in a split moment to speak out about a recent campaign or attach the brand to the latest meme. In reality, most social posts often pass multiple hands before being approved to be written and shared to a platform like Twitter, whether part of a large campaign or not.

Bre Fern, senior copywriter at Argonaut who works on social posts for brands like Cricket Wireless, says a single tweet passes through several levels of approval including client, creative, production, strategy and accounts before finally being posted, and social copywriters often work directly with strategists to help them “fine-tune” the messaging of a social post. This is likely the course of action Burger King took.

Even when there are levels of approval, it also matters that there’s a diverse leadership who feel they have the power to speak up against a post when it comes off as sexist, racist or simply off-brand. “While women now have a seat at the table, it’s not enough if they’re not being listened to,” says Fern.

Burger King did not reveal when questioned about whether women were involved in the campaign process or at leadership levels.

Smaller brands and agencies have even less resources to ensure their posts are ready for the limelight. As news and trending topics surface on social media at a breakneck pace, speed also becomes essential to handling a social media presence and at some point all those layers of approval becomes impractical. Speed can be its own deterrent, of course, leading to more slipups. “Being first is meaningless if you’re charging into your own destruction,” says Bernstein.

When it comes to social media platforms helping out with these challenges, there are few remedies. Ironically for Burger King, Twitter opened up its new conversation settings to advertisers this week, which allows them to choose who can reply to their tweets: everyone, only people a brand follows, or only people mentioned in a tweet. However, while a tool like this might cut down on the backlash an original tweet receives, people who can’t reply can always retweet the original with their opinion which can end up trending on the platform anyway. Community managers and social strategists everywhere are still yearning for that elusive “edit” option on Twitter, so that a word or two in a tweet could be altered after the fact. In 2017, Instagram provided that editing ability for comments on posts and Facebook has long done the same.

Ultimately, Cook says brands need to trust the intuition of their social teams and have enough resources in place. “A combination of operating from a calm and purposeful place rather than frantically grasping for the next ‘win’ on social paired with teams who care about the impact of their work is where consistent, thoughtful and impactful work comes from,” she says.