Nine Publishers Part of Instant Articles
READ THIS NEXT
TikTok tactics: What to know about reaching audiences on the social media platform 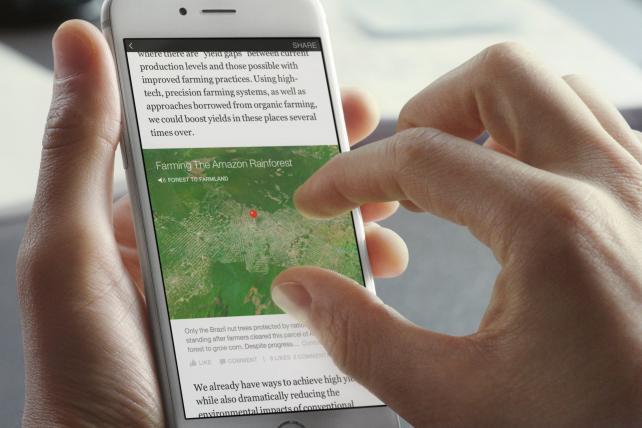 Facebook's Instant Articles program has signed up publishers including NBC News, The Guardian, Spiegel, BuzzFeed and the Times.
Credit: Facebook.

Nine major domestic and international publishers including The New York Times and BuzzFeed will begin publishing articles and videos directly to Facebook as part of an initiative called Instant Articles, Facebook announced on Wednesday.

The highly anticipated partnership will certainly have many other publishers calling their Facebook reps on Wednesday asking how they, too, can get involved. At the start, the media companies rolling out on Instant Articles are the Times, BuzzFeed, National Geographic, NBC News, The Atlantic, The Guardian, BBC News, Spiegel and Bild.

"Fundamentally, this is a tool that enables publishers to provide a better experience for their readers on Facebook," Chris Cox, Facebook's chief product officer, said in a statement. "Instant Articles lets them deliver fast, interactive articles while maintaining control of their content and business models."

Instant Articles will start appearing on Facebook Wednesday with stories from the Times, BuzzFeed, National Geographic, NBC News and The Atlantic on their respective pages, a Facebook spokeswoman said in an email. "We will continue developing Instant Articles with our partners over the coming months and listening to feedback from readers to help us improve the experience," she added.

A big question looming over the concept of media outlets publishing directly to platforms like Facebook has been how the players involved would split revenue from ads served against the articles and videos. According to Facebook's announcement: "Publishers can sell ads in their articles and keep the revenue, or they can choose to use Facebook's Audience Network to monetize unsold inventory."

Facebook will take 30% of the revenue from the ads it sells, according to The New York Times.

Another question has been around data -- how much of it will Facebook share with its media partners. According to the social network, publishers can track "data and traffic" using ComScore and "other analytics tools." Here's how BuzzFeed described the data angle:

We were able to work with Facebook to incorporate ComScore, Google Analytics, and our internal tracking tools into the Instant Article template. Eventually, if you're a BuzzFeed editor, you'll be able to see how your post is performing on the BuzzFeed site and natively on Facebook, and be able to optimize your work with those insights.

Publishers will also be able to maintain their "brand experience," according to Facebook.

Instant Articles introduces a suite of interactive features that allow publishers to bring their stories to life in new ways. Zoom in and explore high-resolution photos by tilting your phone. Watch auto-play videos come alive as you scroll through stories. Explore interactive maps, listen to audio captions and even like and comment on individual parts of an article in-line.

But making money from traffic on mobile devices is a challenge for publishers because the screen size allows for fewer ads, plus those ads often fetch lower rates partly because there is less data to layer into them. Mobile accounts for half the traffic to The New York Times, for instance, but represents only about 10% of its digital ad revenue, the company has said. Partnering with Facebook can help companies like the Times wring more money from mobile.

Facebook pointed to the amount of time it takes a story to load as an impetus behind Instant Articles.

As more people get their news on mobile devices, we want to make the experience faster and richer on Facebook. People share a lot of articles on Facebook, particularly on our mobile app. To date, however, these stories take an average of eight seconds to load, by far the slowest single content type on Facebook. Instant Articles makes the reading experience as much as ten times faster than standard mobile web articles.

A number of publishers have expressed uncertainty and anxiety about Facebook wanting to dip a hand into their pockets. And their fears center on the idea that the social network could somehow tweak the revenue-sharing terms or favor publishers involved in Instant Articles. However, that hasn't stopped a number of media companies from meeting with Facebook about taking up.