After Heady Optimism About the Myanmar Market, Then Came the Reality Check | Ad Age
Skip to main content
Sign In Register

READ THIS NEXT
Dispatches from the panicked GDPR frontline
On the upside, the opening of Myanmar's telecoms sector sent smartphone use through the roof.
Credit: Dario Pignatelli/Bloomberg

When Myanmar was ruled by a military junta and isolated by the international community, Western brands were scarce in the Southeast Asian nation. Today, billboards advertise Coca-Cola, Pond's face wash and Nescafé coffee sachets. Even in Myanmar's rural corners, vinyl posters plugging foreign mobile carriers and Facebook access are everywhere—and villagers use them to waterproof their thatched houses.

Behind the bright billboards, though, the story has become complicated. A burst of excitement hit Myanmar five years ago, with big companies like Coca-Cola and PepsiCo returning when sanctions eased after the country embarked on a path to democracy. Today, foreign investment has slowed. And despite the big potential remaining in a largely untapped country of 54 million people, the heady optimism that prevailed a few years ago has cooled.

Nobel Peace Prize laureate Aung San Suu Kyi has been in power for a year, but foreign investors are concerned about her government's economic plans and the military's persecution of the Rohingya minority.

Some big brands have held off. Burger King and Yum Brands' KFC and Pizza Hut are in Myanmar, long known as Burma, but McDonald's is not. Starbucks then-CEO Howard Schultz said in 2013 that he expected the coffee giant to enter Myanmar within several years; that hasn't happened yet. The brand declined to give a more precise timeline.

Ad spending on TV, outdoor and print ads is still growing, but not at its former breathless pace. Foreign brands spent about $108 million in such so-called above-the-line advertising in 2016, 8% more than 2015, according to Nielsen MMRD, a joint venture between Nielsen and a local research company. That's down from 66% growth in 2012 and 43% growth in 2013.

Those numbers don't take into account increased experiments in digital marketing or growing interest in below-the-line promotions, including events and direct consumer outreach, as a way to reach Myanmar's mostly rural population, according to U Thurein Nyein, Nielsen MMRD's managing director. But growth in above-the-line media has slowed as foreign investors maintain their "wait-and-see attitude" while Myanmar's policies and reforms evolve, he said, adding that currency fluctuations are also playing a role.

Myanmar's treatment of Rohingya Muslims is a major concern.

The last U.S. sanctions were lifted in 2016, but doing business in Myanmar is still difficult. The American Chamber of Commerce in Myanmar has described setting up a foreign entity there as "onerous, expensive and time-consuming." Many countries' chambers of commerce objected to a proposed law that would require foreigners to seek permission from authorities every time they travel domestically for 24 hours or face possible prison time—a potential nightmare for businesses. Real estate in economic capital Yangon is expensive, and electricity remains a big issue.

There have been complaints of a lack of clarity on the new government's plans for the economy, taxation and foreign investment; the government is now trying to improve the investment climate with a new law.

The Buddhist-majority country's treatment of Rohingya Muslims remains a major concern, even with Suu Kyi in power. A United Nations report accused security forces of killing and raping Rohingya, and U.N. High Commissioner for Human Rights Zeid Ra'ad Al Hussein said in a statement that the findings show "very likely commission of crimes against humanity."

Though Suu Kyi's government denied any ethnic cleansing, an activist campaign supporting the Rohingya reached out to Unilever, a major spender in Myanmar, asking the company to press authorities on the issue. Days later, Unilever tweeted that it supported a call for U.N. Security Council action to protect the Rohingya.

In the long run

The World Bank predicts average economic growth of 7.1% over the next three years in Myanmar and says inflation will ease. There are other reasons why many still see Myanmar as a smart investment.

Cars have flooded city streets, a sign of a growing middle class. The opening of the telecom sector brought swift change. Under the military regime, SIM cards initially sold for thousands of dollars. By 2013, the price was $200. Now they go for just $1.50.

"People went from having no form of electronic communication to having Facebook and as much of the internet as they dare to explore," said Milla Chaplin, strategic planning director at Y&R Myanmar, which entered the country in 2013.

Myanmar's spending power is still limited, with minimum wage of $2.64 a day. But consumers are integrating foreign brands into their lives.

Some women wear Unilever's Ponds as a base for their thanaka, the striking yellowish face paste made from tree bark that is worn for its cooling effect, said Rose Swe, who co-founded local ad company Mango Group. Mango, which is affiliated with J. Walter Thompson, is a powerhouse in the market and a local success story; when Ad Age visited in 2013, it had 50 staffers; now it has nearly 180, with clients including Unilever, Samsung and Nestlé.

Snapshot: Coca-Cola's Progress
Coca-Cola was an early mover in Myanmar, coming back in 2012 after six decades away. It has about 1,500 employees in the country and has steadily upped its offerings with time. It has launched a locally produced Nutriboost, which blends milk, juice and nutrients.

Brand Coke needed to introduce itself to people who had never tried it, and it went with the messaging "Delicious and Refreshing." It still uses that line, under the global "Taste the Feeling" campaign. (A single-serving can or bottle costs around 22 cents in Myanmar.) It also did a concert series called the Coca-Cola Moments Together Caravan, which visited dozens of cities annually. "Live concerts and music events were totally new experiences in many parts of Myanmar, and we took this as an opportunity to create our own platform for engaging with consumers around the country," said Akira Nopakunkajorn, marketing director for Coca-Cola Myanmar. — Angela Doland 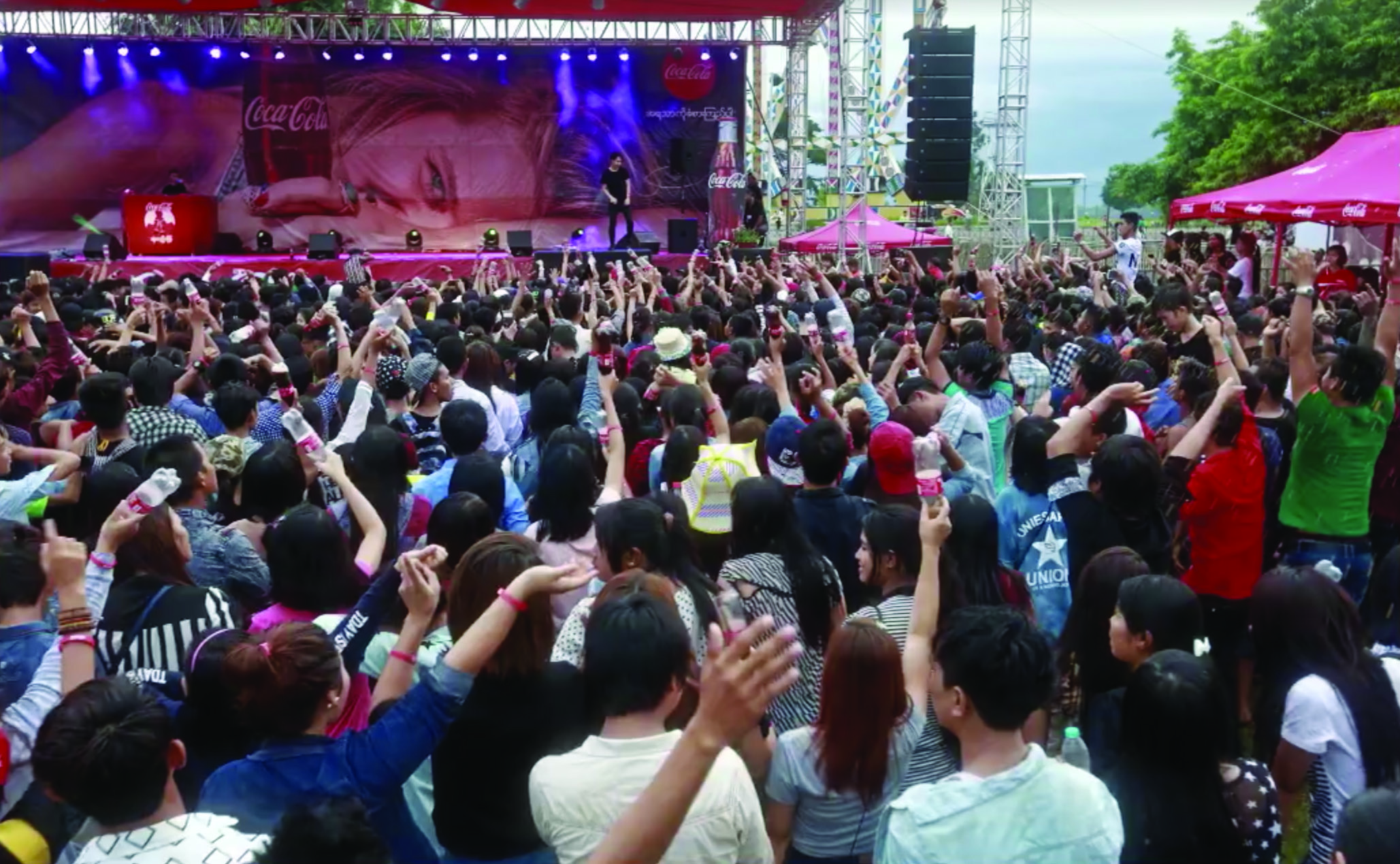