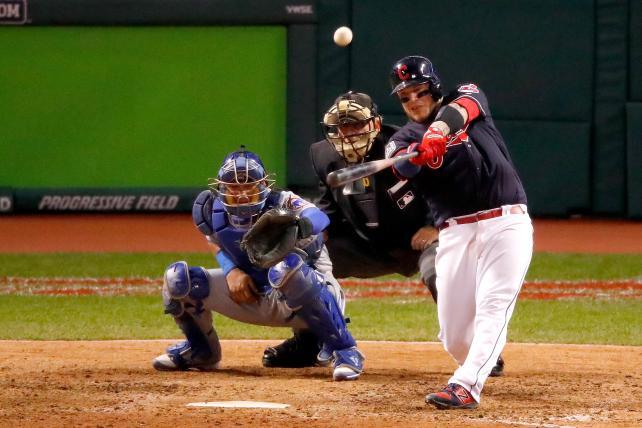 Roberto Perez #55 of the Cleveland Indians hits a three-run home run during the eighth inning against the Chicago Cubs in Game One of the 2016 World Series at Progressive Field on October 25, 2016 in Cleveland, Ohio.
Credit: Gregory Shamus/Getty Images

While there's something about baseball that makes fans and players particularly susceptible to superstition, Neil Mulcahy doesn't believe in curses. And no wonder -- with the Chicago Cubs and Cleveland Indians set to square off tonight in Game 1 of the 2016 World Series, the Fox Sports ad sales boss finds himself in a position that may only be characterized as "blessed."

Mr. Mulcahy's phone has been ringing off the hook since last Saturday, when the Cubs blanked the Los Angeles Dodgers 5-0 to earn their first trip to the Fall Classic in 71 years. In advancing to the World Series, the Cubs look to end a 108-year title drought that began the same year Ford rolled the first Model T off the line. But to do so they'll have to get past a Cleveland Indians franchise that is looking for its first championship since 1948.

Despite a well-documented slide into relative senescence -- the median age of the audience for last year's Mets-Royals set was 54.6 years, just beyond the upper reaches of the adults 25-54 demo -- and an ongoing diminution in the ratings, the World Series remains one of prime-time TV's last marquee events. And given the undeniable appeal of bearing witness to history, this year's best-of-seven series could hang up the biggest ratings in recent memory.

"We're going to see ratings that we haven't seen in the last decade," Mr. Mulcahy said, adding that a Game 7 could very well draw the sort of national TV audience Fox rings up during its Sunday afternoon "America's Game of the Week" NFL broadcasts -- on the order of 27.5 million viewers and a 15.8 household rating. "The Cubs are clearly a national story; inevitably, they're going to draw a lot of casual viewers alongside the more die-hard baseball fans."

The Cubs also represent the nation's third-largest media market, a sprawling metropolis of 3.46 sports-crazed TV households that can only help boost Fox's ratings. While Chicago is a divided city, with the White Sox keeping things locked down on the South Side, the Cubbies appear to have an outsized appeal in their home DMA. According to Nielsen, FS1's coverage of Game 6 of the NLCS drew a 24.1 overnight household rating/38 share in Chicago, which means that 38% of all TVs in use in the area at the time were tuned in for the Dodgers-Cubs broadcast. That same night, the Bears-Packers "Thursday Night Football" game delivered a relatively modest 12.5 rating/19 share.

While the World Series is always a must-buy for automotive, insurance, telecom and quick-service restaurant brands, the chance to air commercial spots within the historic framework of this year's MLB title tilt has precipitated a surge of interest from clients from across the category spectrum. As such, the guaranteed units in Games 1 through 4 are all sold out.

"With the Cubs in there, we find ourselves in an incredible position," Mr. Neil Mulcahy said. "We sold the World Series extremely well in the upfront this year, in what was already a strong marketplace, so that tightened us up."

Naturally, Fox is rooting for a full seven-game run, with a few extra-innings games thrown in for good measure. Pitching changes and bonus cantos serve to carve out additional commercial pods, and impressions can add up considerably during a night of "free baseball." For example, when the Mets and Royals went to 14 innings in Game 1 of the 2015 World Series, Fox aired 129 spots, while the deciding Game 5 went 12 innings and featured 114 spots. By way of contrast, the three games sandwiched in between required the regulation nine innings, and on average, featured 100 spots, which is still well above the average MLB spot load (75). Meanwhile, the two most-watched, highest-rated broadcasts were -- you guessed it -- Games 1 and 5, which respectively delivered 14.9 million viewers and a 9.0 HH rating and 17.2 million viewers and a 10.0 household rating.

The value of extra innings and multiple pitching changes is evident in the amount of dollars Fox secured during last year's World Series. Despite a relatively stunted five-game set, the Mets-Royals series generated north of $240 million in ad revenue, according to Kantar Media estimates. That represented only a slight decrease compared to the 2014 series, a seven-game showdown between the San Francisco Giants and Kansas City Royals that took in $257 million. Each of the seven games went the regulation nine innings.

In addition to returning advertisers like Chevrolet, Geico, Samsung Mobile, Anheuser-Busch, MasterCard and Taco Bell, the latter of which will reprise its popular "Steal a Base, Steal a Taco" promotion, Fox has reassigned two of its marquee sponsorship positions. Lincoln Motor Co. steps in as the new pre-game sponsor, and for the first time in 69-year history of World Series TV broadcasts, the Fall Classic will boast an official presenting sponsor in T-Mobile. (There is no official postgame sponsor; somewhat of a departure from its previous deal with Chevrolet, Fox will use the postgame interval as a means to promote its freshman drama "Lethal Weapon.")

Already a staunch World Series backer, T-Mobile is upping its game this year with the aforementioned presenting sponsorship and a new wrinkle that will efficiently eliminate the commercial break at the top of the third inning in Game 1. In lieu of throwing to an ad pod, Fox will keep its cameras trained on its outfield studio setup inside Progressive Field, where host Kevin Bukhardt and analysts Alex Rodriguez, Pete Rose and Frank Thomas will hash out the first three frames of tonight's ballgame. The bonus studio segment is an extension of T-Mobile's postseason #UnlimitedBaseball initiative, and in cutting down on commercial clutter while giving fans an extra helping of A-Rod, Charlie Hustle and The Big Hurt, the brand is capitalizing on the social buzz surrounding Fox's roster of baseball legends.

Of course, the throw to the studio gang in no way implies an endorsement, in either direction. In other words, A-Rod is not shilling for T-Mobile, and T-Mobile hasn't signed the former Yankees slugger -- or the other two ex-ballplayers -- as a pitchman.

While Fox does not comment on pricing, media buyers said that the average 30-second in-game unit in the Cubs-Indians series is fetching around $565,000 a pop, up slightly from last year's $545,000. Sponsors with more expansive commitments naturally will pay a lower rate than those buying a spot here and there in scatter.

Game 1 of the 2016 World Series gets underway tonight at 8 p.m. on Fox. Chicago ace Jon Lester (19-5) takes the hill against Cleveland's Corey Kluber (18-9) and his deadly curveball.