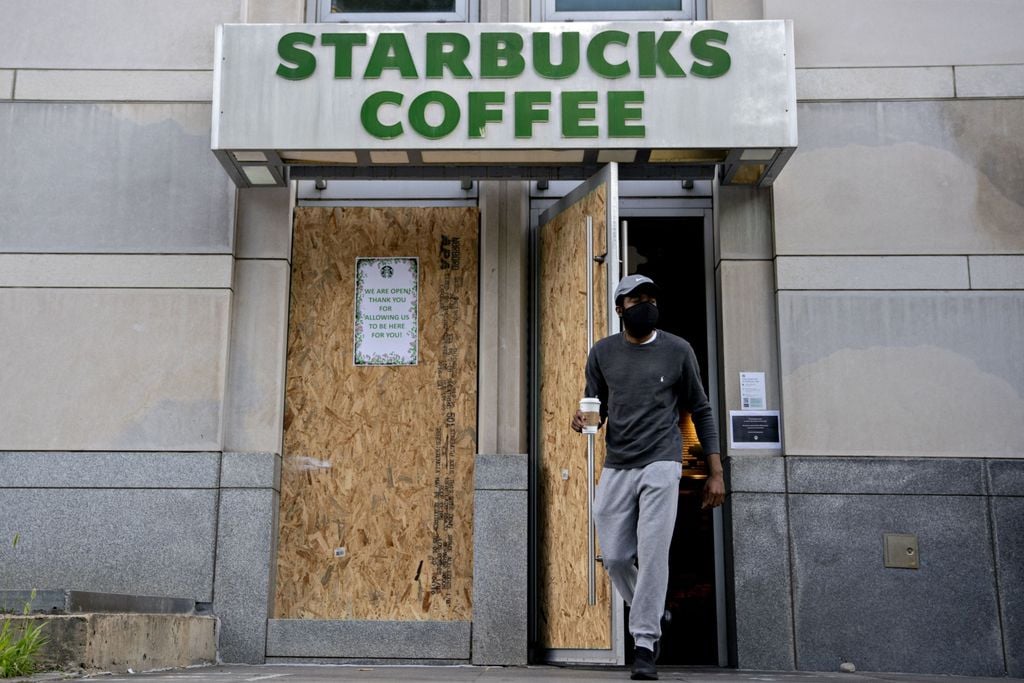 A boarded-up Starbucks in Washington, D.C., on Thursday, June 4.

Starbucks expects the coronavirus pandemic to reduce sales this quarter by as much as $3.2 billion, dragging down the coffee chain’s performance as it sees a recovery stretching into next year.

The company, which like other restaurants has had a difficult time offering guidance, said Wednesday it expects to report an adjusted loss of 55 to 70 cents a share when it next releases earnings. Operating income will decline as much as $2.2 billion in the period, the company said in a statement.

The guidance underscores the depth of the challenges for consumer-facing businesses from the coronavirus outbreak and worldwide lockdowns. The coffee seller, which is exploring new store formats to stimulate demand, is being closely watched as a barometer of customers’ willingness to leave their homes and open their wallets as the pandemic subsides.

“These numbers are a lot worse than the Street was expecting,” says Michael Halen, senior restaurant analyst at Bloomberg Intelligence. “People expect some sort of crazy snapback but it’s not going to materialize in restaurants.”

The shares fell as much as 4.7 percent on Wednesday, the most intraday in more than a month. Starbucks had declined 6.3 percent this year through Tuesday’s close.

The company’s comments also dragged down peers, with an S&P index of restaurant stocks falling as much as 2.7 percent, the most in almost a month. Starbucks, due to its size and propensity to give regular updates, is seen as a proxy for the industry.

In the U.S., its critical home market, comparable sales were down 43 percent in May, though things have been improving with each passing week, Starbucks said. About 95 percent of the company’s U.S. stores are operating currently, even as many New York City sites remain shuttered. That’s in contrast to China, its other key market and a country further along the road to post-pandemic recovery, where 99 percent of stores are open and same-store sales were down just 21 percent in May.

While sales have fallen, customers that do go to Starbucks are spending more during the pandemic, with the average order including more items, the company said. This is expected to normalize over time.

Starbucks plans to accelerate the rollout of its “pickup” store concept, with smaller-format locations that don’t have customer seating. “While we had originally planned to execute this strategy over a three- to five-year timeframe, rapidly evolving customer preferences hasten the need for this concept.”

The pandemic has forced Starbucks to rethink its central concept of being a “third place” away from work and home for customers to relax, it said.

The company expects to open 300 net new stores this fiscal year in the Americas, half of its earlier estimate. That includes the closure of 400 company-operated ones over the next 18 months alongside the opening of a “greater number of new, repositioned stores in different locations and with innovative store formats.”

In China, the company says it is on track to add at least 500 net new stores this fiscal year, despite the virus impact.

Starbucks is also examining its Canada operations and plans to restructure its business there over the next two years. The company said it will potentially close 200 additional stores there, with some of these changing locations.

Chains dependent on breakfast sales, such as Starbucks, have gotten hit disproportionately hard because there are so many fewer commuters on the road these days. Starbucks’ price point is also higher than rivals like Dunkin’, Bloomberg Intelligence’s Halen says, making it less well positioned heading into a pandemic-related recession.

On top of that, a smaller share of its stores have drive-thrus than rivals. Lingering in the café enjoying a coffee was a key part of the “third place” experience, but that concept is “toast right now,” Halen says.