Nut-shaking, soccer data gets real, trashy furniture and more
READ THIS NEXT
The top 5 brand TikToks you need to know about

For Father’s Day, Planters has put the whole Baby Nut/Mr. Peanut saga to bed (for now) to bring us Anthony Anderson in this hilarious homage to dads’ cringey but lovable habits. The new music video-style ad from VaynerMedia and directed by Tool’s Adriana Robles show Anderson and a troupe of papas rattling their nuts, proudly wearing corporate swag vests and sneezing with abandon, backed by an original rap track: “Shake It Like Dad,” composed by Beacon Street Studios. The fun continues with TikTok contest asking viewers to share their favorite dad moves.

The U.K.’s Migration Museum makes clever use of real-time data as the nation is in the midst of watching the Euro 2020 soccer tournament. Outdoor ads from Wonderhood Studios showcase the diverse roots of key England players including Raheem Sterling, Marcus Rashford and Harry Kane. Just before their games start, digital billboards will show the team’s starting lineup and then highlight the absences that would be there without first-, second- or third-generation immigrants. After the game, the posters will show significant scores and how those would have been affected had those players not been part of the team. For example, England would not have won, 1-0, against Croatia in its opening game without Sterling's goal. 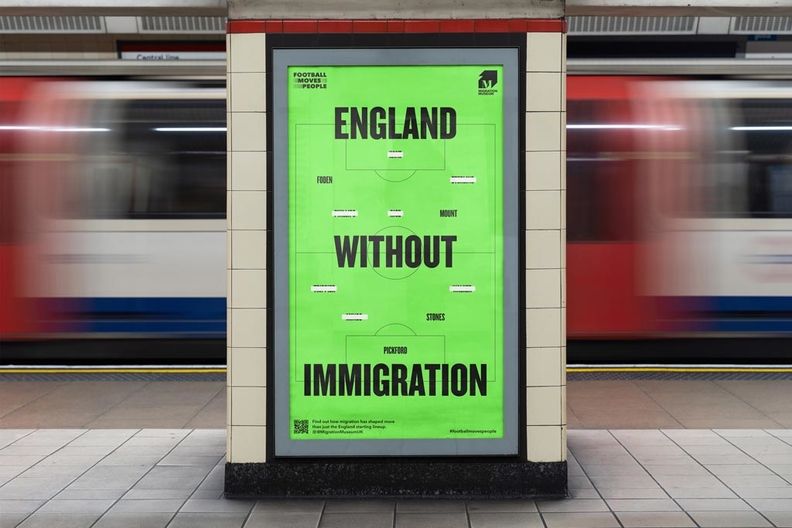 This week, Reebok unveiled a new brand direction under Kerby Jean-Raymond, the founder of activism-based fashion label Pyer Moss who signed on as the company’s VP of creative direction last fall. The centerpiece of the new campaign, titled “Reconnect,” is an 11-minute-long short film that takes a sharp turn from sportswear marketing as we know it. Created under the watch of Jide Osifeso, whom Jean-Raymond appointed as artistic marketing director, and directed by Jonas Lindstroem, the film takes a spare, thoughtful approach to delivering its message. It’s broken down into simple, slices of life, such as one in which a father quietly imparts important life lessons to his son. “Your body is your first piece of real estate, like you own it,” he says in one scene. “Nothing’s more precious than that. When we talk about wealth, we should really start there.”

2. Apple: Your Next Computer Is Not a Computer
Agency: TBWA Media Arts Lab

If you had a hard time getting Disney’s classic song “Part of Your World’’ from the “Little Mermaid” out of your head after you first watched the movie, get ready to relive that agony, thanks to Apple. To promote the new iPad Pro, TBWA Media Arts Lab created this delightful new spot set to a new version of the tune. It depicts people chained to their elaborate desktop setups looking longingly at those who are freed up to do more because they have Apple’s new tablet—just as Ariel pined away for the freedom of life as a human. Matt Aselton of Arts & Sciences directed.

Wait! Don’t throw out that Billy bookcase just because one of the shelves is shot. Hang on to that Hemnes even though it’s missing a knob. In this new campaign from Try Oslo, Ikea is promoting its “Trash Collection” in a series of ads showing its old furniture put out to pasture on the curb or at a dumpsite. The idea is to highlight the fact that in Norway, Ikea will buy back old furniture you no longer need, and that it’s also now allowing you to order spare parts for its goods for free. The aim is to get Norwegians throwing away fewer furniture items and ultimately, help reduce the retailer’s own contribution to environmental waste.