Best of 2021: Jay-Z’s cannabis brand Monogram challenges the hypocrisies of weed legislation with references to bestiality, cannibalism and first-cousin marriage

At No. 12: Jay-Z audaciously promoted his cannabis brand Monogram by calling out hypocrisies in weed legislation compared to regulations on cannibalism, incest and more in this provocative push from Mischief @ No Fixed Address.

Soon after Shawn Carter, aka Jay-Z, debuted his cannabis brand Monogram last fall, his team came out with a daring campaign that parked billboards alongside borders of states reflecting the legal/illegal divide on recreational cannabis use.

Now, the company is out with another provocative push that challenges the hypocrisies of cannabis legislation. The outdoor ads call out laws that ban cannabis-related activities yet don’t restrict behaviors many would likely consider questionable or wrong—like bestiality, cannibalism or first-cousin marriage.

"Cannabis laws are out of date and disproportionately cruel and punishing when compared to the rest of the legal code,” said Carter in a statement. “We still don't have proper regulation for texting and driving in Missouri, but staying home and smoking weed will get you locked up."

The bold statements sit against a backdrop of striking, black-and-white portraits of eight individuals who have been charged for cannabis-related offenses.

"I created this campaign to amplify the voices of those who have been penalized for the very same thing that venture capitalists are now prospering from with the emerging legal cannabis market," Carter added. "Far too often we forget that these are real people whose everyday lives and futures have been affected by this outdated legislature.”

Monogram tapped Mischief @ No Fixed Address to help create the campaign, which is running on outdoor murals, billboards and wild-postings as well as on mobile ads in L.A., San Francisco, Chicago, New York, Washington D.C. and Miami, with plans to expand to more cities before the end of the month. 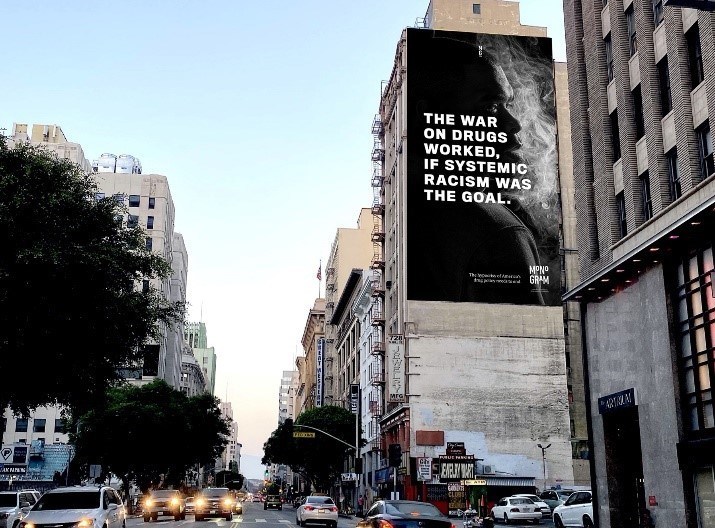 The effort also includes social video, such as the one below featuring a man named Bryan Rone. Back in 2001, he had been struggling to make ends meet, so he purchased a few pounds of cannabis in Texas to sell in Virginia, where he lived at the time. He ended up getting caught, convicted and sentenced to 15 years. During his incarceration, he saw recreational cannabis becoming legal in states like California.

"There really is a state where cannibalism is legal and weed isn't," says Mischief Executive Creative Director Kevin Mulroy. "The fact that there are real people who have done real time for nonviolent weed offenses—and still are—is what Jay-Z wanted to make sure was the focal point of this poignant campaign. More often than not, their sentences are longer than those who have committed far worse crimes. So, instead of looking for stock photos of people or gritty models, Monogram cast real people whose lives have been permanently altered by ridiculous and hypocritical marijuana laws."