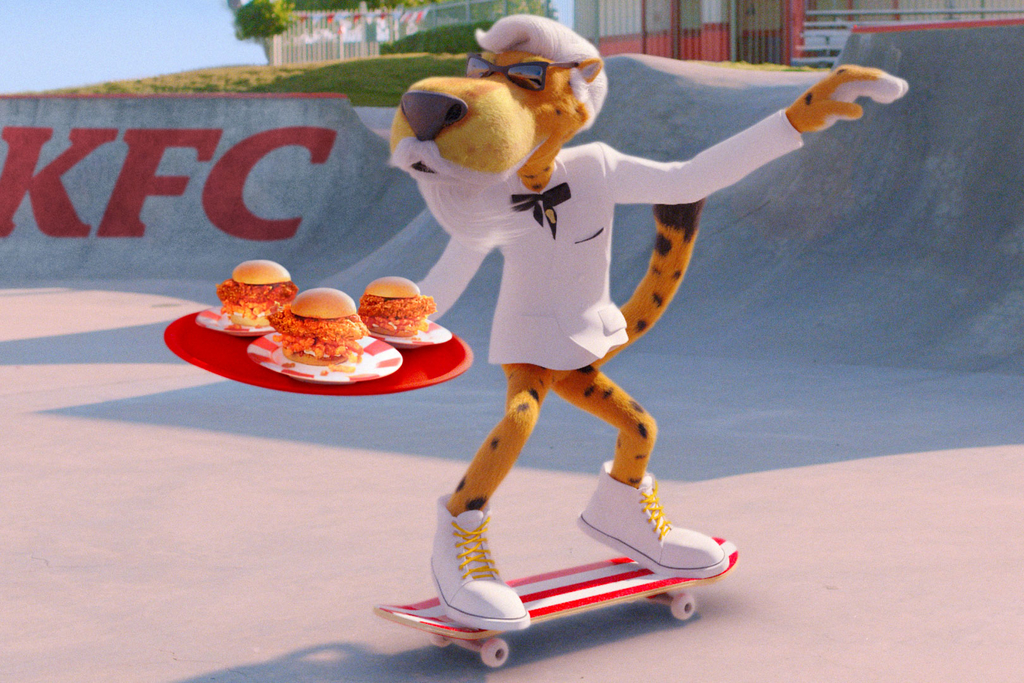 Since KFC partnered with Wieden & Kennedy in 2015, more than a dozen celebrities—from country singer Reba McEntire to Seinfeld star Jason Alexander—have portrayed the fried-chicken chain's iconic founder and immortal spokesman Colonel Harland Sanders. Now, KFC is thinking even further outside the bucket, going beyond its traditional cast of actors, musicians and comedians to bring a cross-promotional Colonel to life as another brand icon: Cheetos mascot Chester Cheetah.

From June 30, an animated Colonel Chester will star in KFC’s TV ads and take the reins on the company’s social media channels to promote the new, limited-time Cheetos Sandwich, a (yes, you guessed it) fried chicken fillet on a bed of Cheetos, topped with mayonnaise and “Cheetos sauce” on a toasted bun.

“We really went over-the-top with Colonel Chester being that feisty salesman for this sandwich, with a sort of nostalgic take,” says KFC U.S. chief marketing officer Andrea Zahumensky, who has made it a priority to bring food items that are “unmistakably KFC” to the company’s restaurants.

The company revealed Chester Cheetah’s new role at a New York City pop-up event on June 27, where the public was invited to a “Cheetos-fied” Manhattan KFC to taste the new Cheetos Sandwich, which will be available through the end of July.

In addition to offering a few one-day-only dishes at the pop-up—including Cheetos-based mac and cheese, chicken wings and french fries—KFC had artist Vizie on-hand to paint a large outdoor mural on the restaurant’s wall, which will remain in place for the duration of the Cheetos Sandwich’s four-week run.

The Cheetos Sandwich isn’t the only new cross-promotional item to hit KFC’s menu this summer. The restaurant also recently partnered with Mtn Dew to release Sweet Lightning, an exclusive new peach-flavored soda. Both items will be available at all U.S. KFC locations starting on July 1.