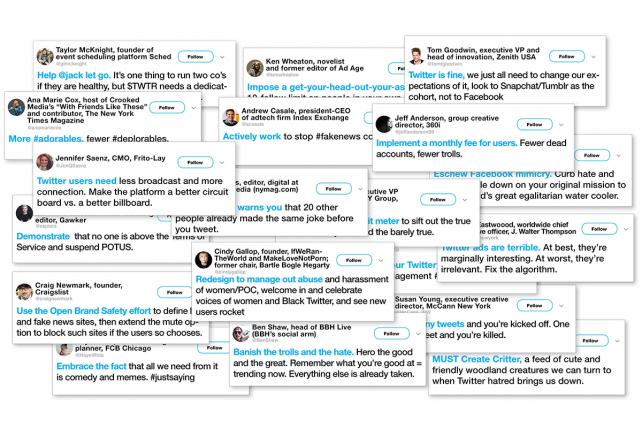 With the exception of Russian bots, arguably no one has been more loyal to Twitter—more devoted to it, more addicted to it, more dependent on it—than media and marketing people. We'll just come out and say it: We love you, Twitter (or love-hate you, depending on the moment—or Moment). And we're sorry you've been going through a rough patch (declining U.S. user base, shaky revenue, @realDonaldTrump). We really, really want you to thrive.

And so we asked 140 media and marketing people to give you some advice on how Twitter can save itself—in 140 characters or less.

It's too easy to experience Twitter in other media. No #fomo for not being on it. Make content that makes Twitter a destination. #exclusive
—@sfheat
John Elder, CEO of San Francisco-based agency Heat

If I were Twitter, I would go to @adambain's house, back up a dump truck full of cash to bring him back to oversee revenue AND product.
—@MikeDuda
Michael Duda, managing partner, Bullish

Since Twitter is a great forum for news as it happens it should create a "BS index" for any verified user. #unfakethenews #bullshittometer
—@davidlbaldwin
David Baldwin, founder of Baldwin&, "a hybrid branding digital advertising mobile social media brewery thingy in Raleigh, NC" (per its Twitter bio)

MUST create Critter, a feed of cute and friendly woodland creatures we can turn to when Twitter hatred brings us down.
—@jasonsperling
Jason Sperling, executive creative director, RPA

Enact a rule that for every mean, troll-like tweet someone sends, they have to send five nice ones.
—@kelseyjoynelson
Kelsey Nelson, director of social influence at Greenville, SC marketing agency FerebeeLane

Stop yourself from becoming a propaganda machine, we've got enough of those.
—@RobWeatherhead
Rob Weatherhead, founder of Bidex, the London-based conference about biddable media

Twitter needs to find a mass audience: building features and marketing itself to become as sticky with the rest of the world as it is with media obsessives like myself.
—@thejongardner
Jonathan Gardner, director of marketing at image performance platform ShareIQ

Impose a get-your-head-out-your-ass rule: 10-follow limit on people in your own industry. Five for media people.
—@kenwheaton
Ken Wheaton, novelist and former editor of Ad Age

Find a business model that accepts the reality that everyone who wants to use Twitter uses Twitter. (Good luck!)
—@pkafka
Peter Kafka, senior editor, media, Recode

Stop trying to be Facebook. Accept you can be a strong utility without being a world-beater. That's Twitter's path towards a legit future.
—@jeremarketer
Jeremy Goldman, CEO of brand engagement consultancy Firebrand Group

Find a business model that accepts the reality that everyone who wants to use Twitter uses Twitter. (Good luck!)
—@pkafka
Peter Kafka, senior editor, media, Recode

Use the Open Brand Safety effort to define hate and fake news sites, then extend the mute option to block such sites if the user so chooses.
—@craignewmark
Craig Newmark, founder, Craigslist

It's complicated. Like a migraine, but less fun. Identify the problem Twitter can solve better than anyone else, then go build that future.
—@ShannonEis
Shannon Eis, VP of corporate communications at Yelp

Twitter users are super-savvy about being targeted. As brands, we have to be completely transparent and figure out how to bring value if we want to be relevant.
—@iamdavidroman
David Roman, senior VP and CMO at Lenovo

Twitter should help publishers guarantee reach to its followers without gatekeeping them. Also if it created affinity groups, we'd be able to leverage it in so many ways.
—@HIGH_TIMES_Mag
Adam Levine, CEO, High Times

There are only two - tiny - factors holding @Twitter back: Scale & a real value proposition for advertisers. Like I said, tiny, right? (1/3)

All seriousness, @Twitter should take a page out of the @Foursquare playbook - engagement+content+data - or, maybe, merge the two. (2/3)

Knock it off with the algorithmic stuff and growth-hacking. You'll never be Facebook but at least you can be good.
—@jeffbercovici
Jeff Bercovici, San Francisco bureau chief, Inc. magazine

Demonstrate that no one is above the Terms of Service and suspend POTUS.
—@espiers
Elizabeth Spiers, founder of media lab The Insurrection and founding editor, Gawker

Exclude everyone but Trump from engaging with Twitter. If a tree falls in a forest and no one is around to hear it, does it make a sound?
—@aaronhicklin
Aaron Hicklin, founder and editorial director at Grand Editorial and editor-in-chief, Out magazine

Embrace the fact that all we need from it is comedy and memes. #justsaying
—@HayetRida
Hayet Rida, senior strategic planner, FCB Chicago

What Twitter can do is allow me to write more than 140 characters so I can really tell them what they should do.
—@thesalesexpert
Tom LaVecchia, founder of X Factor Digital Marketing

UPDATE: Twitter is granting Tom's wish. See "140 Characters, the Defining Quirk of Twitter, Becomes a Relic of the Past."

Change from social platform to destination for breaking news. Most news hits Twitter before other media, often from the horse's mouth!
—@MrBuchuk
Daniel Buchuk, director of communications at customer-logistics startup Bringg and former social media manager at the BBC

A prompt that warns you that 20 other people already made the same joke before you tweet.
—@bendwilliams
Ben Williams, editor, digital at New York Media (nymag.com)

The purpose of Twitter is to follow premium content. It should continue to invest in premium and work on developing better ad products that leverage its attributes.
—@VelvetEllis
Steve Ellis, CEO of influencer marketing platform WhoSay

Twitter needs easy-to-use features for filtering the firehose so users can find new people and conversations relevant to their interests. (1/2)

The opportunity for discovery is Twitter's biggest advantage. While hard for newbies to figure out, it's what keeps savvy users coming back. (2/2)

Twitter needs to become a primary destination for users rather than a secondary market.
—@mconnollyd
Michael Connolly, CEO of adtech firm Sonobi

Banish the trolls and the hate. Hero the good and the great. Remember what you're good at = trending now. Everything else is already taken.
—@BenShaw
Ben Shaw, head of BBH Live (BBH's social arm)

Twitter needs a bullshit meter to sift out the true from the nearly true and the barely true.
—@CoffeeAlways
Sheri D. Roder, executive VP and chief of the WHY Group, Horizon Media

Twitter is not a social network. It's a news outlet. They should stop trying to get new users and focus on extracting more money from media clients. (1/2)

They can easily charge The New York Times tens of thousands of dollars a month to push their articles out. Ditto celebrities (2/2)

Each time someone says something mean, reduce the number of characters they can tweet by one. 140, 139, 138... Trump'd be at zero by now.
—@nickbilton
Nick Bilton, contributing editor, Vanity Fair

It's too late—I gave up party lines when I moved off the farm.
—@Sid_Holt
Sid Holt, CEO, American Society of Magazine Editors

Merge with (or get acquired by) Pinterest and give Instagram a run for its money as a social-visual platform.
—@simondumenco
Simon Dumenco, media columnist, Ad Age

Twitter is fine, we just all need to change our expectations of it, look to Snapchat/Tumblr as the cohort, not to Facebook.
—@tomfgoodwin
Tom Goodwin, executive VP and head of innovation, Zenith USA

Don't make Google's mistake. Keep politics out of your algorithms and don't ban people just because you disagree with them. Your only future.
—@AnthonyMacriSEO
Anthony Neal Macri, founder at Toronto web design and digital marketing firm ANM.digital

I still go to Twitter more often than to the restroom, so they should be fine.
—@pellesjoenell
Pelle Sjoenell, worldwide chief creative officer, BBH

Twitter needs to change the user growth narrative on Wall Street. Real-time openness and data is what sets it apart and contextual ad ops are waiting to be unlocked.
—@damata
Jason Damata, founder and CEO of media consultancy Fabric Media

Share revenue with top tweeters.
—@jason
Jason Calacanis, author of "Angel: How to Invest in Technology Startups—Timeless Advice from an Angel Investor Who Turned $100,000 into $100,000,000"

Stand on the ground of its terms of service and delete all racist/sexist/homophobic/transphobic/hate/etc. accounts from the platform.
—@Mr_McFly
Gary J. Nix, social media and brand strategist

Get rid of the "In Case You Missed It" features. They often show tweets I have already seen. In fact, get rid of all these similar extras and just load my tweets!
—@BCNMediaNews
Brian Allen, editor of TV and streaming news site BiCoastal News

So why didn't we ask you for your thoughts about impoving/fixing/saving Twitter? Well, we're asking you now! Send us your 140-characters-or-less idea by using this link ([email protected]) and please include "fix Twitter" and your name in the subject line as well as your Twitter handle in the body of the email. We'll update this post with the best additional suggestions.