When preparing for their ninth studio album Death Magnetic, it's obvious that the legendary rockers of Metallica were seeking to recapture some of the more recently-missing metal magic of their earlier days. A little more Master of Puppets, a little less Reload.

To that end, the band put bearded wizard and known career re-igniter Rick Rubin in the producer's chair, obviously hoping some of his recent success with artists like Johnny Cash and Neil Diamond would rub off. Hetfield, Ulrich and Co. also teamed with award-winning design studio Turner Duckworth, which won the inaugural Cannes Design Grand Prix this year for its work with Coke, to recharge the band's brand identity.

While it's still early to make any bold pronouncements, since the album's September 12 release, Death Magnetic has sold over 500,000 copies and marked the band's fifth consecutive debut at the top of the charts.

We spoke with Turner Duckworth partners David Turner and Bruce Duckworth about working with Metallica, how it compared to other clients and why brand identity is as important in music as anywhere else.

How did this partnership start out ? did the band just give you guys a call out of the blue?
David Turner: It started with a personal friendship, actually. Lars Ulrich is a friend of mine and he'd always been interested in what we do. He's been to the studio and looked over the shoulder of designers as they craft the finer points of a logo and he was fascinated by all that. He'd seen our work for Motorola, Coke and others and said, "We need that kind of thinking." He said that the record industry people had given up on the CD and packaging, and don't get branding on a functional level so he wanted to work with us.

Then we had to meet with the rest of the band to convince them it was a good fit. I was a bit skeptical myself, wondering if we were doing it because we were mates or because it was a good fit. But the more I looked at Metallica's visual history, I realized they have a really strong brand that has had a heyday but, in their fans' perception to some degree, had gone a bit of the rails recently. They have this crazy logo they've used but it has been re-designed so many times it seemed the soul had been stripped out of it. There was a lot there that, as with any established brand, wasn't necessarily being expressed properly through design. So rather than just working with a friend, it became a very interesting branding challenge. 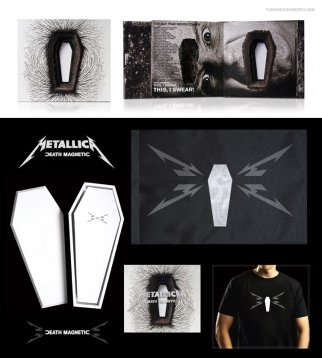 What was their brief ? what did they ask you to accomplish?
David Turner: While there wasn't a specific paper brief, in many ways it was one of the best briefs we've ever had. Their brand is so clear. Often the challenge with clients is determining just what the brand is all about. Why should people pay attention? But these things were crystal clear with Metallica.

Bruce Duckworth: They were very aware that the age of the CD is limited and people are moving away from physical packaging to a more digital form. They felt that if they were going to do a CD they wanted it to be one people would remember and get excited about the packaging. They genuinely believe that the physical package is a great thing and should have value.

David Turner: When we first showed them our potential concepts, we put as much emphasis on what it would look like in the tiny corner of your iTunes screen as how it would look in the physical packaging. They just had never been presented design that way.

Obviously with a title like Death Magnetic, certain imagery comes to mind. Describe how this went from initial idea to finished product?
David Turner: At the point of our very first meeting with the band they hadn't settled on an album title or finished all the songs. I always tell clients that you start with the product and then create a name and that's the theme you build your marketing around. But they couldn't decide between four potential album names. I spoke to James (Hetfield), who writes all the lyrics, and got him to talk a bit about each song. And when he'd gone through them all I immediately saw that one of their titles tied them all together. Many of the songs were about death, not just the negative side of it but the strange attraction death has and also the theme of life, redemption and something more than death. So there was attraction and repulsion, and life and death, all contradictory things. One of the titles they were playing around with was Death Magnetic and I thought it was perfect because it really seemed to tie the songs together.

In one sense the design is very simple and literal, there's a coffin for death and a magnetic field, but at the same time it's open to all sorts of interpretations. For instance James saw the coffin shape as more of a door than a coffin. So we deliberately made it simple so you could read it as just an opening.

Bruce Duckworth: And I think the vernacular for the band and heavy metal is a simple, iconic world, and that translates fantastically well to small icons that go on your phone or iPod. So it boils down to a simple iconic graphic. 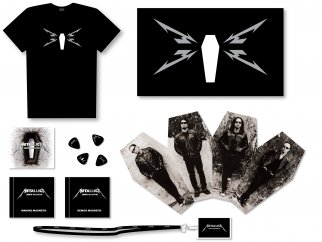 What past projects specifically informed how you approached this one?
Bruce Duckworth: Well, there are simple branding principles that come into play. If you understand your consumer and your client's problem then you end up with an answer that's right. So that experience overall helps. But I think Coca-Cola was an interesting project in this respect.

David Turner: When Coke came to us they had this iconic brand that had sort of had the soul designed out of it. There was just too much going on and it had lost a lot of what Coke great. So I think that work parallels this project well. Part of it was stripping things back down to what the brand was originally and the other part was adding a fresh new approach. And I'd like to think that's what we did with this Metallica work. We took the old logo and reworked it to bring it back to life. The fans love that thing and that reconnected with a lot of people. Then at the same time we created a ton of imagery with the dark themes appropriate for the heavy metal category and yet it's a white cover, which you don't see often in that genre. So there is a real parallel there (with Coke) in that it's taking the best from the past and adapting it for the future.

How did this project work flow compare to your more traditional work?
David Turner: It was run very much like a regular design project. We had our account people have a series of meetings, we set key points along the way where decisions had to be made, that sort of thing. It was more the locations of our meetings that were a bit different. One was in the recording studio, while another was in the back of a private jet flying over America. So it wasn't the usual gray conference room. But overall it was largely the same process.