Japanese Messaging App Tries to Crack the U.S.... With a Store for Plush Toys | Ad Age
Skip to main content

Japanese Messaging App Tries to Crack the U.S.... With a Store for Plush Toys 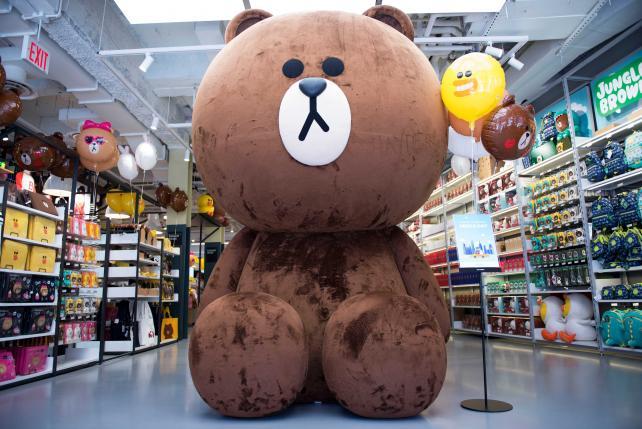 Cartoon faces of bears, rabbits and cats are plastered on any imaginable product in the 4,600 square-foot Times Square store: plush toys but also slippers, coffee mugs, luggage tags, coin banks, mousepads, fans and tote bags. There are 11 characters in all, including Cony the rabbit and an alien named Moon who has a crush on Cony.

But the store itself is an unexpected marketing move for a very different product: Line, the Japanese messaging app established in 2011.

After taking over messaging in Japan, Line is trying to globalize its business and tap into the U.S. market. It hopes Line Friends, as the store is called, could be the in that it needs.

"With this next phase of our global expansion, Line Friends will continue to grow as a character brand that crosses international and cultural barriers to bring excitement and joy to people around the world," the company said in a statement.

Line's previous U.S. efforts include a contest to design virtual stickers for people to use inside the app and a pop-up store in Times Square stocked with Line-themed merch. Up against Facebook's popular WhatsApp and Messenger, however, the going has been slow at best.

"They're taking this very reverse approach in the U.S.," said Randy Nelson, the head of mobile insight at Sensor Tower, a mobile marketing intelligence company. "Whatever app efforts they have aren't resulting in growth for the apps, so they're trying this."

Nelson noted a somewhat similar approach from Snapchat, which set up pop-up storefronts for its branded Spectacles. Snapchat, however, had one major advantage.

"It has this major install base in the U.S.," Nelson said. "Line definitely doesn't."

One year after Line's IPO at the New York and Tokyo stock exchanges, growth outside its core markets -- Japan, Taiwan, Thailand and Indonesia -- has been largely stagnant. Monthly active users in those countries grew to 169 million at the end of June, up 7.5% from a year earlier, the company said in its most recent earnings report. It did not quantify users in the United States, though Sensor Tower estimates that Line downloads in the U.S. declined to 820,000 in the second quarter from 1.4 million a year earlier.

James Kim, CEO of the Line Friends subsidiary of Line, declined to comment on the app's recent results, saying the day's focus was on the Times Square store and the characters' global expansion.

Christian Brucculeri, CEO of the messaging and marketing tech company Snaps, argued that the Times Square store is less an attempt to win over the U.S. market than a bid to build brand recognition with visiting international tourists.

"I believe the strategy is a bit different this time, in that Line is attempting to create the next Disney style character bench from its sticker characters," Brucculeri said in an email.

The original stickers brought a new revenue stream for Line, which realized it could cash in on the cute bears and rabbits users were sending each other on the app. It's since expanded its business to video and mobile streaming, ride-hailing, food delivery and a work-based platform a la Slack called Line Works. The company in February introduced a virtual assistant named Clova to power the Line Wave, an intelligent Bluetooth speaker, akin to Amazon's Alexa.

Many of these ventures integrate the Line Friends, but it's still unclear how exactly they hope to make a significant challenge to Facebook Messenger or Facebook-owned WhatsApp, both of which boast around 1.2 billion users.

Outside the Times Square store on Tuesday, a Line Friends bear named Brown and the alien Cony waved their arms to try to lure shoppers through the doors. Inside, Brown appeared on $12 tote bags and special-edition pairs of Beats by Dre headphones, outfitted in a gold chain and sideways hat. There was little mention of an app.

A store full of plush dolls won't do the trick, according to Nelson, the Sensor Tower executive -- even if the goal is simply to further the Line Friends brand and not just the messenger app.

"How do you establish or get these characters in front of enough consumers to really make an impact?" Nelson said. "For them to basically see and fall in love with these characters, it's going to take a lot more than one retail location."

"I think maybe this approach to merchandising is a bit of Line saying, 'We've got to do something in the U.S. market to stand out. What do we really have that's super unique?'" he added.